Russia-Ukraine War Crisis : Three explosions were reported near Ukraine’s western city of Lviv as US President Joe Biden wrapped up his visit to neighbouring Poland on Saturday. “There have been three powerful explosions near Lviv…Everyone should keep calm and stay indoors,” city council official Igor Zinkevych said in a post on Facebook.

Earlier in the day, Biden met the Ukrainian foreign and defence ministers at the Marriott Hotel in central Warsaw in his first talks with top Kyiv officials since Russia’s invasion began. He also met Ukrainian refugees and humanitarian aid workers during a visit to PGE Narodowy Stadium in Warsaw.

The war in Ukraine has killed 136 children in the 31 days since the start of the Russian invasion, Ukraine’s office of the prosecutor general said Saturday in a message on the Telegram app. Meanwhile, Moscow signalled on Friday it was scaling back its ambitions in Ukraine to focus on territory claimed by Russian-backed separatists in the east as Ukrainian forces went on the offensive to recapture towns outside the capital Kyiv.

All 132 people on board China’s crashed plane dead 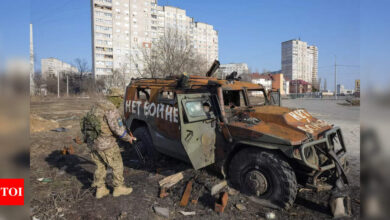