Hyderabad: In a clear indication of which way he was headed, former Telangana Rashtra Samithi (TRS) leader and state health minister Eatala Rajender was visited by a volley of leaders from the Bharatiya Janata Party (BJP) at his residence on Friday. The in-charge for BJP in Telangana, Tarun Chugh, was also among the notable faces who was present there.

“BJP delegation led by Tarun Chugh visited my residence for a luncheon meeting,” wrote Eatala Rajender on Twitter after the meeting. Similarly, former BJP Telangana president Dr. K Laxman and BJP executive committee member N. Ramchander Rao also posted similar tweets, which Eatala retweeted. Over the last week, it was almost certain that the former TRS leader had decided to join the saffron party, but it was not officially announced.

However, Friday’s meeting more or less confirmed it. Eatala Rajender, who was the state health minister just few weeks ago, met the BJP’s top leadership in Delhi some days ago, and was slated to officially join the party soon. A senior BJP leader, who did not want to be quoted, said that Eatala will decide the date himself, and then join the saffron party.

Eatala Rajender was removed from the cabinet amid allegations of land encroachment of 66 acres of assigned land by the Jamuna Hatcheries Private Limited, which is owned by his family. He was thrown out from the post of health minister amid the peak of the ongoing second wave of the COVID-19 pandemic. Soon, the health portfolio was taken over by chief minister K. Chandrasekhar Rao (KCR), whom he had indirectly criticised in public recently.

The former health minister had met several political leaders from various parties, including the Congress, but chose to join the BJP at the end. Through Eatala Rajender, the saffron party is hoping that it will finally be able to make inroads into rural areas of Telangana by riding horseback on such leaders. Even in the recently held Nagarjuna by-election, the BJP was able to get only 7,000-odd votes, showing that it is weak in rural areas. 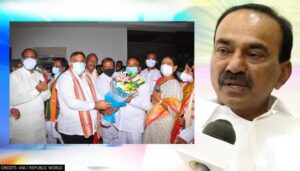