Prime Minister Narendra Modi on Friday met Russian foreign minister Sergey Lavrov in New Delhi and was briefed by the latter on the situation in Ukraine, including the ongoing peace negotiations.

In a statement, the Prime Minister’s Office (PMO) said Modi reiterated his call for an early cessation of violence, and conveyed India’s readiness to contribute in any way to the peace efforts.

Lavrov also updated the Prime Minister on the progress of decisions taken during the India-Russia bilateral Summit held in December 2021, the PMO said.

The Russian foreign ministry also shared a tweet in this regard with some photographs from the meeting. Among those present for the talks were external affairs minister S Jaishankar, national security advisor Ajit Doval and foreign secretary Harshvardhan Shringla. Lavrov was also accompanied by two officials.

Lavrov arrived at the national capital on Thursday evening on a two-day visit following a trip to China.

Lavrov held talks with external affairs minister S Jaishankar earlier in the day, following which he talked about “very good relations” between the two nations that ensured the continuation of bilateral trade notwithstanding Western sanctions.

The Russian foreign minister’s visit to India was taking place amid massive condemnation from the United States and its Western allies for Moscow’s invasion of Ukraine that was over a month-old now.

Notwithstanding pressure from the West, India has so far maintained a neutral stance on the war and abstained on voting on resolutions moved in the United Nations against Russia, while calling for end of violence and return to talks.

India may also buy oil from Russia at a discounted price, according to reports.

Lawyer Kicked, Slapped On Road In Karnataka. No One Comes To Help Her 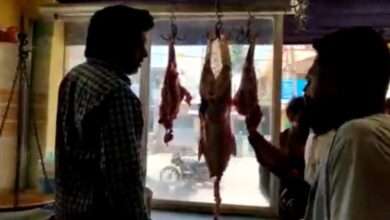